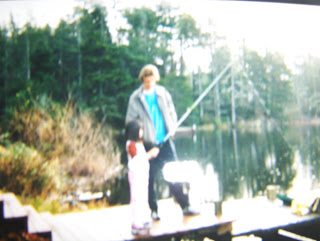 In America, we feel connected to the entire world in so many ways:

One: Hubby and I have these connections: I am Italian by birth; he is American by birth; My father was born in Brazil. His mother's family came from Denmark, connected to Sweden through her father. His father's family is connected to England, Germany, and Norway. His religions: Unitarian, Presbiterian, and many more. Mine, Catholic. We were practicing Catholic when the children were young.

Two: My brother in law married twice; the first time to a native Mexican. The second one to a black woman from Texas. Their religion is Southern Baptist- evangelical.

Three: My eldest son married a native of Burma. Her mother is a native of China. Her sister is married to a native of Taiwan. Their religion is Buddhism.

Four: My daughter is married to a Jewish man whose family traces ancestry to Russia and Poland. They have a blended religion of Jewish and Catholic traditions.


(Thanks to Paul at Costco for inspiring this post.)

How about you? Are you also related to the bigger world?

Posted by Rosaria Williams at 9:47 AM

Oh Rosaria, I like all your global connections. I have some too. Many of my friends were born on other continents.
Today I am having a giveaway on my blog today of a book about funny senior moments. Come on over.

that is pretty cool...not in as rich a way as you but i have many a friend from around the world....my immediate family though, not so much...

I'm afraid my family is just a bunch of white Okies, but we do have Choctaws on my father's side. As for religion, it used to be all Baptists. Today we don't know what we are. :)

Your history is certainly quite rich.

My families have been in the States for two hundred years. Until the last couple of generations they were all country folks. English, Scotch-Irish and German immigrants originally.

Let's see ... English/Irish on my mother's side. German on my father's. Raised in Methodist Church, converted to Catholicism in my early 20s. Now a lapsed Catholic who considers herself quite spiritual finding joy and peace in family, nature, music, literature ... and on and on. I enjoyed your Rosaria and look forward to reading other comments!

Not connected to the world as you are, but certainly to Europe, Southern Africa and Australia. BUT blogging has connected me to the remainder of the world that I have seen through other people's eyes :-) Diane

How exotic you are! My family and my husband's family have been in the U.S. since its earliest days and seem to have followed each other on their trek from north to south. His, however, did have a little visibility. Mine seemed to have hid out in the hills. Rabid Protestants, all of them.

what a rich and beautiful tapestry your family weaves.

Well, I was born in Germany (as one of the last surviving Prussians to be found - I'm kind of proud of that, maybe because I stayed alive despite all odds), my husband in Iran. Accepting and adjusting to different thinking, customs, family expectations, cultures, religions, traditions, languages, etc. may - in the eyes of many - certainly be interesting and exotic, but it can also be tough, tough, tough with the mishmash of above. Even for our children it cannot have been easy at times and may still not be.

For me, there has always been a pervasive feeling of rootlessness and not really belonging. But what, thankfully, has developed is a sense of open-mindedness, enrichment, understanding, tolerance and appreciation of our differences and diversity, which was passed on to our children and, hopefully, to our grandchildren as well.

Goodness your global connections are widespread. :)

all white europeans here as far back as we have been able to go...german, english, danish. all christian til I married a jewish man and adopted it for my children. I personally don't subscribe to any religion. Not an atheist, just don't like religions or the big father in the sky concept of god.

What more can I say? Wow!

Hi Rosaria, our family is pretty eclectic also. Paternal Grandfather O'Regan born and raised in England (ancestry Irish)brought his family to the US in the 1918 (my father was 11). My grandfather's brother chose to take his family to Canada and stayed there. Maternal Grandfather was French, originally from France but came to the US through Jamaica. They spoke mainly french in their home.

It is interesting to see how small the world really is! We have some Welsh and Polish roots. Here stateside, I am a descendant of the founder of Gettysburg, PA.

Let's see...I'm half Greek, half German, Jack's family came over on the Mayflower (my family was in the row boat behind!) I was raised Catholic, Jack Protestant, now we are Mormons....that's about as crazy as it gets in our family!

Hi Rosaria, my family is a mix of nationalities. On my mother's side were German and English; my father's family were Welsh and Irish, so we have pretty much covered Great Britain (except for the Scots... but I have visited Scotland).
All of my family are from the deep South, Georgia to be exact, right in the Bible belt. Mother's family were Methodists; my father's family Baptist & Episcopalian. The Baptists are deep into the religious stuff. Me, well, I'm mostly Episcopal or Druid and definitely have the kinky/curly Irish hair although it is not red.
Loved your post!
I am so fortunate to have developed liberal views as a teen. And I am immensely happy to know such a variety of people through Blogland.

Wow, you really have the connections, Rosaria. We're Scandinavian Lutherans connected to Norway. However, we're learning recently that we're more Scottish than we think because of the Viking raids...lots of in-breeding :) My husband's Norwegian roots may be more Laplander, we think. What they call "black Norwegians"

You really are cosmopolitan!

That is a very interesting mix! I expect you have lots to talk about and many traditions to share..
Maggie X

It is indeed a Small, Small World, a theme pavillion at Disney.

Totally English. Nothing else!