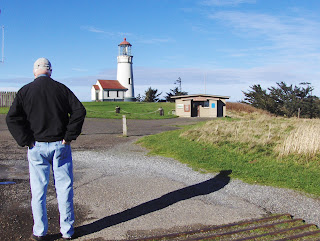 (I took this picture of my Hubby looking at Cape Blanco Lighthouse just this morning, during our walk on these rocky shores I've come to love. The lighthouse is situated at Cape Blanco, the westernmost tip of the contiguous United States-for the geography geeks out there.)


There are certain stories that guide us, year after year, lighthouses, like the Cape Blanco Lighthouse pictured above, a government built structure, still operating on Cape Blanco, to keep ships from crashing on the rocky shores.

If you have been following the news, you've caught the new Scrooge Story: Let the Rich keep their tax cuts, or nothing will happen in Congress.

Today, on Hardball with Chris Matthew, Matt Kimble from Freedomwors said: "...unemployement benefit is junk... The trouble with unemployment and economic stagnation... is a spending problem..."

I'm just a pensioner. Both my pension and my Medicare benefits were part of my wage package through a lifetime of work. Talking about eleminating these programs because they are costly, is an ethical and moral problem, the one Mister Scrooge had to deal with.

To balance the budget on the backs of seniors and people on unemployement is an ethical problem, when Wall Street and millionaires insist on keeping their bonuses and being rescued when things go bump in the night.

Greed is governing right now!
A lighthouse only for those with big yachts!


"Less Government" is a code phrase for get rid of all programs, all regs, all things that make good govenment, including unemployement benefits. It's a code phrase for, every man to himself. Women and children and unemployed cost are rocking the boat, will make us drown.

What is a nation to do?

Let's keep the Lighthouses, the regulations, the programs that give people a lifeline. In a Democracy, we have a moral imperative to save everyone in a storm, and to give education and protections to prevent crashing on the shores.

Then, let's have a conversation on how to become the great nation we think we are, the nation that shone like a lighthouse to the world at war, to the world in poverty. Let's have our conversation on how we can afford to do all the things we need to do, in a smart way, in a fair way, even in a humane way, Right now is the time to start. Right now, for Christmas.
Posted by Rosaria Williams at 5:11 PM

The top 2% of the country control the wealth. With big business and special interests in the politicians pocket its going to be difficult to get focused on the majority of people.

I feel your frustration.

Rosaria, I agree: we must have a conversation and work on fixing the problem, but when I hear people calling others names! I am sickened. Why can't we talk? why can't we do the right thing? the moral thing, as you state? We are appalled at the fraud, the waste, the deception... somehow, something has to change.

PS: I just had my mammogram denied!

Thanks for the visit Velva! I'm looking forward to your beautiful concoctions.

Di-So sorry to hear that! Medicare will cover Mammograms starting in January. Check that your insurance company reads up the new laws.

I'm with you on this one. It is frightening as I move to a fixed income to have the government screwing with my future...a future I worked and planned for.

I am tired of the uglyness of government. I'm ready for less name calling and more cooperation. I used to have heros in government. Leaders who provided a vision for where we should go, what we as a country could be. Where are they now?

So well sad! It is so frustrating to see what is happening. We need to speak out!!

here here...i agree...we cant give up on people...i can think of a lot of other things we spend far too much on...

I agree. No increase in social security benefits this year, because there is no inflation; yet the price of gas, oil, and food continue to climb. I guess those are just things we seniors can do without.

If Obama extends his arm out too much farther to republicans, it will fall off at the socket. What's being created seems to be a kind of class warfare, not so different from the middle ages. These are the true death panels - cut seniors, cut services, cut social security, cut public education, cut medicare - but continue war, the tax cuts for the upper 2 percent. I don't get it.

It enrages me, Rosaria, when I hear about doing away with social security ( I worked for 45 years and paid substantially into it ). I never dreamed that, at 66, I'd be in the mess I'm in now. After losing my job nearly two years ago now and having to retire on only a half pension ( another way the city and county of San Francisco screwed its forensic RNs ) and social security, I've now exhausted my entire savings and Wednesday, I went to see Consumer Credit Counselors. The end of Feb, I move out of the home I've rented for 13 years and, yes, I may be living in my van. I'm terrified.

Oh, we are in a sad state of affairs...so frustrating to watch the fat cats cry and whine...til they get what they want.

Oh, what wise and lovely words!

I would love to proud of my country, but I am not. Time for wiser heads to lead us, if only their voices could be heard above the selfish and greedy din.

Merry Christmas to you, and may the New Year bring hope to us all!

Your words frame my thoughts.
Just voting does not dismiss our responsibility. We still have work to do. Keep a phone # list and email list of your congressmen and bug the rascles.

It's a code phrase for, every man to himself.

It seems that in North America we live inside of a contradiction. Our society's pump is geared toward every man for himself, and yet our sensibility, our ethical and moral being (should) know(s) better. How do we want to be seen? Rich and powerful, or just?

I struggle with these contradictions most of my adult life. I was for the tax cuts, but not for the superrich, but then my income, today, like yours comes from my and my husband's work. It used to be middle income. Not any more. We are on the edge of poverty, by government standards, yet I don't feel like I am suffering. A couple of $1ooo one way or another I could get food stamps and Medicaid.

Where is the answer that is fair? IK don't even know where to begin.

We have by personal choice given all we used to spend on the Holiday Season that seems to start earlier every year, to those we perceive in need more than we. And we haven't missed a meal yet.

Had we had a majority Conservative governmemt Canada would have that way several years ago. Since the opposition has a majority but not unity we have been, so far, preserved.
However each new survey seems to put our Conservatives within reach of a majority comes next election...frigthening.

I don't know much about this situation so I really can't comment but enjoyed your post, nonetheless. thankyou
and thank you for your visit and comment.

Here's the part of this I don't get: they somehow get people to vote against their own self interest in support of slogans. We voted them in. Against what's good for us. Huh?

Working in health care (probably until I'm 80..or dead) I see what's being cut, the way Docs have to practice, the insurance co. deciding who gets help and how much, and worrying like RNSANE, that I'll have a job or even if our community hospital will be around in the future. Scary times. Thanks for the post!

The irony is that election campaigns are so expensive these days that you can only get elected if you've got lots of money — which lobbyists are happy to provide, for a price.

Sadly, you can't please the lobbyists and the ordinary people at the same time.

And potsoc is right; Canada is only a hair's breadth away from tumbling down the same calamitous on which the US is travelling.

Great lighthouse post...Yes, the world is completely upside down! I just wonder what the solution is ever going to be...

I've really been enjoying catching up on your posts, including the delightful one where you describe finding your home..

I think you should run for President, lakeviewer - I'm serious!

Update:
The Tax Cuts Bill was signed into law by President Obama. Everyone got tax cuts, maintaining the specifications Bush had passed before, and the unemployment coverage was extended. So, a big hurdle, with a big budget cost. Not a great solution, but a temporary stopgap to allow the most hurt to receive an additional bandaid.

The tax cuts for the rich will cost us $120 Billion or so and for the inheritance tax another $29 billions or so. This part is what drove the conversation forward, by the way, got enough votes to move the legislation through both houses and onto the President's desk.

Politics is one series of storms after another.

Sometimes, though, a ray of light shines through. Just heard that Don't Ask Don't Tell law was repealled! A great victory for human rights!

Got to keep the eyes on the ball, the whole time, folks.

The game goes on with or without your participation.

Thanks for your visit, your insightful comments, your patience and understanding.

A kind of hurting so beautifully told. Thanks for sharing this.

I rarely talk politics or religion, but love lighthouses! did you see the lighthouse that was covered in ice? Incredible!

first, thanks for your visit over at my place. it is nice to be found.

the issues you raise are truly becoming more real for those of us who are looking toward retirement - keeps getting pushed back.

if i knew the answer i'd be all over it. it is truly so complicated.

A Cuban In London said...

What a great post. I loved how you juxtaposed the current economic situation with the lighthouse motif.

All I can do is wish you a relaxing festive period. May the New Year bring health and success to you and yours!