This year, pledge to notice much. 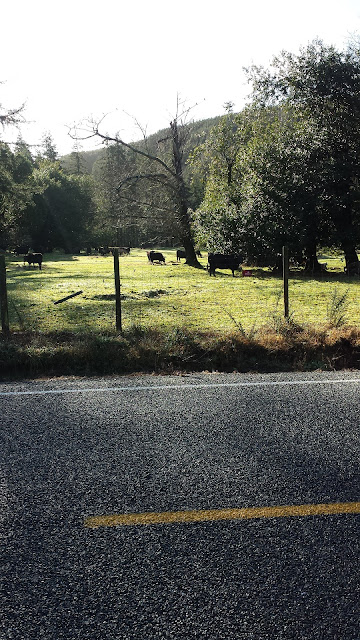 We have driven this road, going up the Elk River, numerous times, on the way to our favorite place up the winding road, to admire the white waters and be astounded by the pristine forests still standing in this place. We hike a bit of road down to the river, then we attempt to hike a bit of the unspoiled forest nearby. We had never stopped here, in this spot.

On this day, just a few days ago,  Hubby stopped because of a clear straight wide stretch, the river on the left, the meadows and livestock on the right, and plenty of sunshine. Let's walk here, he says.

We walked over a mile before we realized how stunning the place was. A mile is our daily pace.
Look, look how many little creeks have been formed recently, I noticed out loud, with so much water around the cows have to be careful not to be swept down to the ocean. There the cows stood, all in concert, at about noon, waiting for us to pass on. But we didn't. We stared right back at them. There were no other people around, so we took our phones out and shot this picture.

In a square mile around us, river, mountains, pastures and habitations dotted the landscape. Cows stood out above all. Contented, unhurried, friendly toward each other as one or two ate together, mostly nearby others. There were no people around, though cars were rushing by at unusually fast paces for a country road.

Nearby, fishermen and lumbermen shacks abounded. Occasionally, a mansion of sorts, overlooking the river, with additional pastures curated for golf swings, not cattle raising.

After I took the picture, I noticed my cell phone had not connection and told Hubby we needed to get back to the car, back to the major highway where one can make 911 calls and be aided swiftly.

If we had an emergency on that stretch, I told Hubby, we might not get help easily.
Nah, people drive by often, and they would notice something.
Not really, look at how fast they all move. When we drive, we too move fast, and don't notice much.
We'd notice if a car had been parked for a while.
How much is a while?
A couple of hours. Most people leave their houses for errands and are back in a couple of hours.
Nah. Most people drive too fast to notice much.

Posted by Rosaria Williams at 10:32 AM

Labels: noticing the world around us

Most people would notice the lone car only at night, suspecting something amiss...you are so right we should make a point of stopping and really looking at our surroundings, rather than whizzing by in our cars.

My husband is one of those who notices. I'll be off in my mental reverie, and he will notice, question, and if there is any concern in his mind, he will stop and check. Some few people are like that. As you note, the rest of us need to make an effort.

My husband is one of those who notices. I'll be off in my mental reverie, and he will notice, question, and if there is any concern in his mind, he will stop and check. Some few people are like that. As you note, the rest of us need to make an effort.

Because of my work I have become very task oriented...concentrate on the technical, the important, the emergency or urgency of the day. Jack and I can be in the same place and he always sees something I don't and I'm so glad when he points it out. Perhaps because his profession has him observing, listening and then working with his patients. I'm hoping to be more that way and this post is a good example of taking that time to enjoy the beauty and the new trail! Happy New Year Rosaria and I wish you good health along your way!

How annoying when the realities of life push their way into a moment.

Yes, I think you are very right. We miss so much in our fast paced lives as we travel down the road of life. We even miss that others might be in trouble on the side of the road, or even they could be in trouble and live next door to us and we never notice.

Like you, I no longer feel very safe when I am out of range for my cell phone.

Hi Rosaria ... notice things .. yes notice more and check things out - I often go out without my phone - just habit and then I want it usually to take photos - but then I'm on my own and thus have my own agenda. But observing more - taking time out to stop and notice things .. I'll take your advice on that - cheers Hilary

I noticed every detail pertaining to birding or flyfishing or whatever. Broadening my perspective, I'm working now on noticing the details of everthing about in nature. What fun!....:)

Yes...... we must notice the little things and try to help those in need. We never know when that might be. It doesn't always seem obvious, does it?
Maggie x

happiest of the new year, rosaria,

i have to say i do notice. i notice clouds and colors and scents and the feel of sand and especially passing smiles.

if i didn't already know, i would know you are a writer.

I agree that, in our world today, life often passes us by without our paying much attention. We have to make a conscious effort not to overlook things. Kind of sad but that's the way it is. I am trying to be more mindful as the years pass. I think, "I may not pass this way again. I want to take in everything." My sweet little granddaughter, soon to celebrate her third birthday makes that so important. And a new baby will arrive in February.

I think that once retired and not having to constantly be in a hurry we do notice more. I always take the little roads instead of the freeways even if it takes longer, and my husband who no longer drives, looks at everything. The area where you stopped looks so peaceful. I hope that 2016 will be a good one for you.