All politics is local! 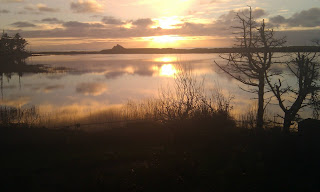 "This beautiful sunset doesn't help pay the bills!" The old woman stated with a toothless smile. I noticed that smile before I heard her words.

"Yes!" I stated in retort, not really wanting to get too involved in the conversation.

She was fishing on the city dock with her young grandson, both of them wrapped up in layers, though the temperatures were still mild. The jackets and sweaters were old and dirty. The two of them were sitting at opposite sides of the dock, and from the look of it, they must have been there for hours.

"Caught anything?" I chanted, still not truly wanting to be engaged, ready to move on my walk.

"Look!" She pulled a string of trout from the water, a beautiful catch indeed.
"Wonderful!" I smiled back.
"Do you like trout?" She asked as she pulled a couple off the string and bagged them.
"They are delicious." I said, not sure what to do, how to accept. I had nothing with me except my phone.
"Take them. We have lots of them." She kept smiling as she handed me the bag.
"I have to give you something back..." I was hesitating. I couldn't take something for nothing, I thought. This kind of interchange only works between friends, or family, people with whom you give and take.

I did. The little boy, a first or second grader, came over and asked me if I knew how to gut and fillet the fish because he could do that for me too. I told him  it was ok.

By the time I got home and prepared the trout, and ate it for dinner, I still could not believe than anyone could just give me something for nothing. The next day, and the next, and through the week, I carried a ten dollar bill on my daily walk. I wanted so much to meet the same people and thank them properly.

This weekend I was at the Democratic Party Headquarters, at a small gathering to get out the vote. I met the woman again, and I found out her name and her status, and the names and status of dozens of other folks who represent the democratic party here in our small town. Some, like this woman, are making do, living on social security check. She wanted to know that some kind of help is available if she can no longer take care of her grandchild.

She is still looking for a job, by the way, anything that she can still do, gardening, cleaning, pet sitting. She volunteers at the local Pantry, bagging groceries, going on gleaning trips to local orchards and farms to get surplus produce for people who are worse off than her. She volunteers at school most days too, and is present at every event her grandchild participates.

She is barely eligible for Medicare, but has not enrolled yet because she doesn't need a doctor. She is happy her grandchild has Oregon Child Health card, and occasional dental care provided by local dentists who stop by in a van at every elementary school, once or twice a year.

I explained to her that she must enroll for Medicare, and see a doctor.

Her only need, she said, is that her grandchild is cared for if she is no longer around.

Posted by Rosaria Williams at 8:29 AM

You've written a lot of posts where I followed every word and loved them, but this may be my favorite one ever.
She wouldn't take your money, I don't think . . . as much as she may need it.

Wow. Some people are really amazing. It sounds like you met one of them. Thanks for sharing this wonderful story.

A wonderful story Rosaria. Perhaps she is not aware of how to apply for medicare & doesn't want to say so. I'm so glad you enjoyed the trout. Prayers for her and you. Thanks for sharing. Hugs.

Yes, I deduced the same about not knowing how to go about the process.

What a great story of a wonderful woman.
I work with SCSEP at the food pantry here. They pay me a salary of $7/hr but the money does not count as income against food stamps or subsidized rents. If you are over 55 they will pay your salary at any non-profit that is not religious. It works out very well for me. In case you're interested in passing the info on to this woman, here is the site for Oregon -- http://www.oregon.gov/dhs/spwpd/pages/employ/seniors.aspx

people helping people out...that is what life is about...so cool on them giving you the fish...at one point we were on public assistance so the boys could get healthcare...i love her heart in that..

"We get by with a little help from our friends," . . . and sometimes strangers.

That grandma is one hard-working lady. Too bad there isn't a good and easy way to help her. The system sometimes fails. Sigh!

This post and the comments are thought-provoking indeed. Would the action of the woman who offered the fish have been thought unusual 40, 50 or more years ago? I think not. Rosaria, your reluctance to accept a gift without remuneration is understandable in today's world, but acceptance of another's generosity in the spirit it is given has regrettably become largely a lost skill. Sharing with neither expectation nor embarrassment is something most of us need to work on. It's called love.

So, tell that brave woman she should make sure to get herself on Medicare. It'll help her; it'll help that child more.

What an amazing lady! And I think Dianefaith is right, she probably would refuse your money!

Oh wow. She is working for the right political party, that's for sure. Scary what might happen to those meager benefits if the right wing has its way.

Interesting what Rubye Jack says. I hadn't heard about that.

What a great post about a great lady. I do hope someone can find a way to sign her up for Medicare, as Tom says it's in her grandson's interest as much as hers. And isn't the grandson sweet to think to offer to clean your fish for you -- he's taking after his grandmother.

I was reminded of that tag line from an old TV series "There's a thousand stories in the naked city. This is just one of them." How many interesting, and moving stories are out there if we stop and listen?

Tell her, her grandson needs her to sign up for Medicare...that it would help prevent her from getting sick so she'd be around longer to take care of him.

Thank you for a specific story about a person who is sidelined. She needs assistance but is more concerned about assisting those who she feels need it more.

I wonder if it is difficult for her to accept help, the way it is for you.

it's heartbreaking to hear about this kind of thing happening everywhere...

Great story. Wow, one hardly expects to see someone so spirited, warm-hearted, and accepting of so little. A rare bird.

Her beautiful attitude and hard working ethics is something everyone should have. She seems like a gem of a lady and I hope she can find work. I also hope she finds help to get enrolled in Medicare and make sure she receives all benefits she and her Grandson are eligible for.They are exactly the ones the programs were intended to help. Wonderful post.

What a moving story. I'm so glad you found the woman agasin. The title of your post is so true.

Again, Rosaria, you remind us to lift up our heads and instead of seeing the cracks in the sidewalk, see life and people around us and connect. In our neighborhood there is a "Transition Movement" composed of people who believe that we need to transition back to the personal connects of years ago where we traded services and goods and helped each other out. For my grandparents, it was a way of life. For my generation, it is a movement!

I love the story and we have many such people where I live.

Besides governmental aid, many charities are available with services, but have to seek out persons sometimes that need them.

She needs to keep herself well enough for her grandchild, as it sounds as if he may be dependent on her.

Thanks for stopping by.