How writing saved my sanity. 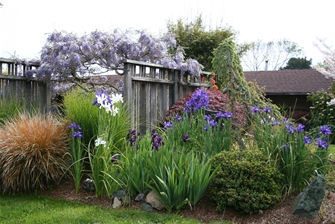 Nothing helped. Not even gardening and walking and movie watching. My disquiet after we settled in our new place did not have a clear cause. Retirement was supposed to be a happy time in people's life, but it became a serious depression state in my life.

I took long, solitary walks, noticed birds I had never seen before; talked to other retired people. Everyone was happy and well adjusted. I was the only unhappy one.

I did mention my condition to my doctor at my annual visit.  He prescribed some blood tests and later called to tell me to pick up Vitamin D at the pharmacy.
I was relieved! A Vitamin D deficiency is curable.

Weeks later, my mood had not changed.  (Did I mention that our rainy season lasts eight months?) My husband suggested we take a trip to a sunny location.

Florida, a place we had known during our graduate days was the place to go to. We had spent many winter holidays at the Keys, sometimes driving all night from our apartment in Tallahassee for a chance to  bathe in the warm waters of the Gulf as our small children frolicked for hours at the waters' edge. Sitting on the white sands  with tropical drinks made us forget our day-to-day challenges.

We booked our flight knowing the temperatures would be in the mild 80's and sunny the entire time. One afternoon in the same bar that Hemingway had frequented in Key West, I  began to think about our Tallahassee days,  the six years we had spent as graduate students, living in Alumni Village with other couples with small children, eager to get on with our lives, worried about our future. That evening, using the hotel's stationery, I penned my first story, the hurried days of graduate school. It was a piece of fiction drawn from my experience.

When we returned from Florida, I joined a writing group, learned from a blogger how to start a blog, and soon I was writing almost as much as I was reading, and gardening and walking.  The doctor saw me a year later and was happy with my new attitude. He credited Vitamin D. I knew that if I had not discovered writing, I couldn't have made that big leap.

Posted by Rosaria Williams at 6:48 AM

I am pleased that writing has helped you and blogging in particular. I read years ago an article in the newspaper about elders blogging and how it helped them adjust to retirement, an empty nest, or isolation. One of the blogs they mentioned was As Time Goes By. I looked at it and thought it might be a good idea. When my daughter suggested I start a blog to write my memoirs about France I thought I might write a dozen posts or so – and here I am 4 years later. I have made many friends and it has helped me tremendously in my daily life with my husband’s illness. I think that without it I would be very stressed. Your blog has been good for you and for all of us your readers as you bring so many ideas to be thinking about and discussed

I'm certainly glad that you did, too -- as I've thoroughly benefited from your beautiful words and thoughts.

smiles. writing has def been good therapy...allowing me a place to process what happens in my life and let it go....

Oh yes, I had some occupational withdrawal too....I suppose had we not moved across the country I would have been enticed to continue part time consulting at least. But the blog was my refuge too....I would have loved a writers group but nothing was here that suited me...one I attended was 4 little older gals who did not even use computers...another through the UW Adult Senior learning turned into reading short stories led by a retired professor. So I took to the keyboard. My blog has functioned as a memoir of sorts too. I like that blog that Vagabonde mentioned too.

Well I wrote this and then had to resign in so here again, me too, blogging helped me a lot. I suppose had we not moved cross country I would have been content to consult part time and keep career ties and skills in use. But here in Mayberry, not so. I tried a writing group once, it was 5 nice but quaint older women who do not even use computers so they were of no help and there was nothing in common. I tried a senior course thru the UW learning center taught by a retired professor and that evolved into merely reading short stories, so another flop. Finally I just took to blogging which has also been a memoir of sorts. Now I don't know where all my time goes, but it's hard to keep on blogging. Better at it in winter.I do so enjoy yours though and have full empathy. The rainy does tend to bring on the drearies indeed, but we are in drought and would welcome lots of rain now.

that's the problem with the myth of retirement in our culture. we are used to being busy and productive, being social and interacting with people, thinking we are making a difference. and then we retire and find nothing but endless hours on our hands to fill. gardening and reading and walking apparently did not fill the gap for you. I'm glad you found something to make you enjoy life again.

the real secret, rosaria, is that you discovered yourself through writing. even this is no easy path to recovery. there are formidable things to be faced but through writing we face them, otherwise we tremble not understanding what is wrong with our limbs.

i smile. i will always hold your personal stories dear)))

I relate to so much of this post. I would be lost without my blog and the blogging community. Even after writing and publishing a book, I found I couldn't not write.

Or do without Vitamin D!

I love that no matter how we are, we can keep reinventing ourselves! This is a great post ~~ I didn't know you spent time in Florida. Key West is one of my favorite places!! l

Good doctor. I got the talk about depression from my doctor this summer...still working on solving the problems but things are better.

Writing made me the insane person I am many decades ago. I say this is where the blame falls because in order to write with clarity you can shut your eyes to nothing.

A traveling third ring in of three ring. A self contained circle of madness under the big top.

Much to the enjoyment of all your readers here in blog land, you found D-best thing for your life! Glad I found you!

Oh, truer words were never blogged! I agree with Erin that through writing you discover yourself. It is always a mystery and a discovery. You start with one sentence, never knowing where it will take you and what you will find at the end. Always an adventure.

And writing (along with reading) is saving my sanity too..!

Thank you for writing this and sharing your doldrums of long ago. This has helped me face up to mine.
Thank you so much for your helpful, kind comment. I guess letting time pass is the only thing to do. That and making a new start with things can bring healing.
Maggie x

So often, the things you say echo my life. When my 21 year forensic nursing postion with the city/county of San Francisco ended in massive budget cuts, I thought I would never recover. At 64, having been so specialized for two decades, I really couldn't start in another nursing specialty. Reluctantly, I retired, midst a lot of tears and soul searching.

I had always liked writing, especially poetry, and I had wanted to publish a book of my poems. With the help of a friend and blogger, I published "Life's Journey" when I was 65. I, also, started blogging.

The writing was a life saver for me. It gave me something to do and I could still champion causes. My 80 cruises over the past twenty years had to sustain me since I really couldn't afford to spend so much money on travel....but, instead of cruising, I decided to live part of my years in India, where I knew so many Royal Caribbean crew friends. That, too, has been an unexpected blessing for me. I could live in India for part of the year and still afford to live the rest of the time in the San Francisco area.

Isn't it funny how we manage to adjust! The many new friends I've made, through blogging and writing, have been incredible, as well....you are right there at the top.

Ha, vitamins are not always the answer I agree. I have to say though writing and blogging are now part of my life, even if I do not post on a regular basis. Also all the friends I have made through blogging are always a support. Keep up the good work, glad it has worked for you. Take care Diane

Indeed. My own experience is similar. Writing has provided a creative and emotional outlet I couldn't find otherwise...:)

it seems that cures for our ailments don't always come in a pill or one bottle of something, but sometimes a geographic cure is just what the doctor ordered. sunshine is a really important thing and living in a place with endless months of gloom can have a depressing effect. you were wise to get some florida sun, but i also agree that writing can be a huge help to boost one's mood. sharing our creativity is good for the soul.

You made a lot of people happy when you started writing. Most importantly, I'm glad you did that for yourself.