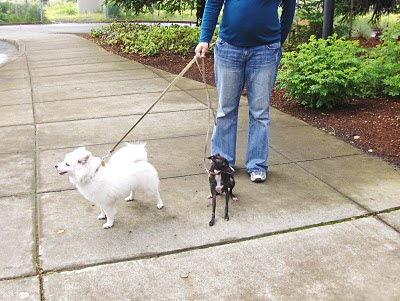 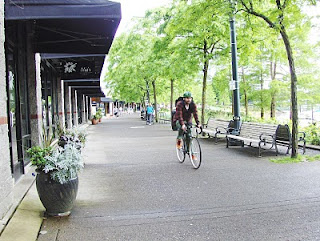 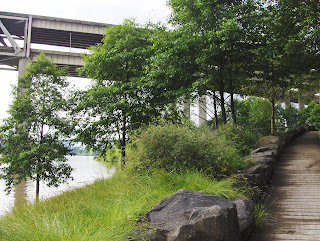 There are dog walkers, and bikers on this stretch of riverfront this particular morning.  Portland is surrounded by two major rivers, one dividing it, this one in the picture, the Willammette, flowing south to north, joining the mighty Columbia at the north side of the city.  Both rivers are navigable by ships, boats, and other water craft.  The Columbia, as most of you know, is the more famous, longer and bigger, starting its journey in Canada, traversing territories and picking up tributaries for hundreds of miles until it reaches the Pacific.  The Lewis and Clark expedition, the first major government-sponsored exploration of the Northwest back in the 1800's was up in these areas, moving west from Missouri to Astoria and Long Beach Peninsula in Washington State. They arrived at the mouth of the Columbia in winter.  The soldiers and explorers were in much distress because of the constant rain and blustering winds. This kind of weather is not for the weak-bodied or weak-minded.

Portland is a hip city, full of college students, Intel and Nike employees, musicians, artists  and foodies.  It has great restaurants, a wonderful music scene, and plenty of things to do, see and buy.

We'll be spending time with our children in Eugene in the next few days. Eugene, in the middle of the state, is a mini Portland. 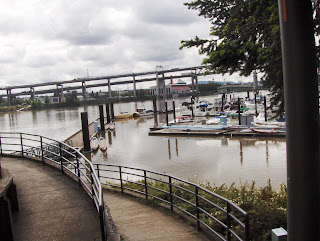 In the next few posts, I will attempt to prepare vegan meals. Wish me luck.
Posted by Rosaria Williams at 7:47 AM

Labels: Lewis and Clark., Portland in the spring

looks like you are having a wonderful time...lots to see. wishing you the best at cooking the vegan meals...i have actually been to eugene as well...

I love Eugene, though I never have tiome to enjoy it when i am there. Good luck with the food.

Edamame
Drop whole frozen pods into boiling water for 3 minutes. Remove and strain immediately. Toss in a few teaspoons sesame oil, salt and garlic. Mmmmm. My mandarin teacher taught me how to make this. Easy and really good.

I will try the edemame. Thanks, Amy.

Monkey Man, there is sunshine in Eugene this morning. Yesterday afternoon, I went for a walk on a sunny interlude and returned soaked to the bones. Oregon!

The Columbia River is just one of our many exports to the U.S.

Portland is beautiful. I wish our cities were more like it. Canadian cities can be so humdrum. Sigh!

Continue having a wonderful time traveling! and a happy weekend for everyone you're about to see. I'm sure your arrival in Eugene will be uplifting for them :)

Have as nice trip and enjoy visiting with your offsprings.
Since I'm a rabid carnovore I will pass on the vegan thing.

I'm looking forward to your vegan recipes.
I must get into our city with a camera to show you.
Our city is nothing like yours.
I guess because it is still young.

keep dry and hope that sun continues to shine.

What a beautiful place. Enjoy!

it's a good thing you've soaked up some 'portland'...if i remember eugene rightly it is so much drier and not nearly as gorgeous as portland! have a great time anyways...i'll continue being the oregon transplant who is trying to grow here in kentucky!

I would love to visit Portland again someday. It's been about 30 years....

Looking forward to the veggie recipes.

Rosaria, it does look like a wonderful place. And it's always good to know of the history of a place. It seems ironic to me though, that when I think of the highly developed United States, I find it difficult to see the history. So much is so manicured. And yet it is a culture so history proud. Just an observation. Perhaps it is simply the numbers of people and the amount of development? What do you think. Or maybe I'm just so used to wildishness...

Have a beautiful time with family.

Rosaria, I forget that history is so different for different countries. I didn't forget that you were from Italy; that's why I put it to you, to grant me a context through your eyes that might be close enough to you so that you might see and yet far enough removed to see it more clearly. xo
ern