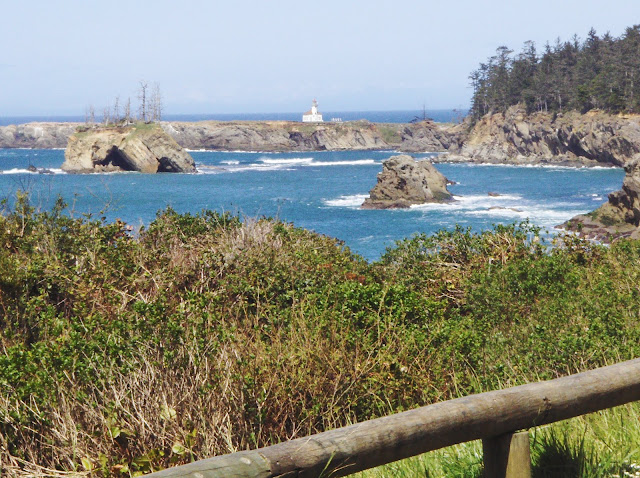 This is Cape Arago Lighthouse on the Southern Oregon Coast, sixty miles north from where we live. The entire Oregon Coast looks like this, mountains jutting out to the Ocean, islands and stacks popping out everywhere.

Ships need plenty of warning signs to avoid these waters.

The entire coast of Oregon is punctuated by lighthouses, most of them still working, day and night, offering respite and guidance to the weary mariners.  Nowadays, though, with so much better instrumentation, boats and ships have marvelous mapping opportunities to identify dangers, temperatures, fish finding sensibilities, and a range of other functions necessary for navigation. 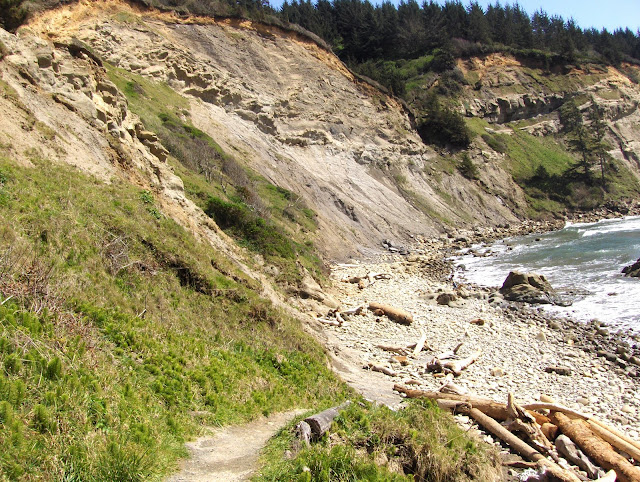 If ships didn't have lighthouses, they would end up as broken carcasses on deserted beaches like this one, waiting years or decades to be discovered.

This stretch of beach is full of driftwood and broken ships in an area that is still wild and natural and hardly ever trespassed by humans. 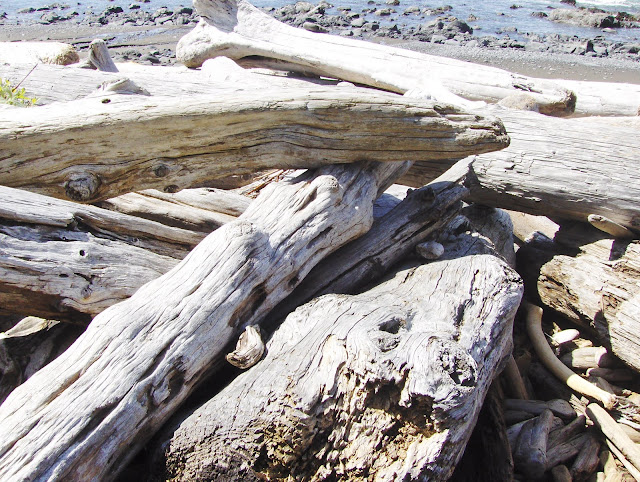 Lighthouses were built before many people moved to these shores, as ships traveled these waters to and from California, transporting lumber south to Eureka and San Francisco to fuel the big appetite for homes and businesses during the great California Gold Rush.

Oregon has a relative small population, about three and half million in the entire state, less than the city of Los Angeles.  The biggest town on the coast is Coos Bay, about sixteen thousand people, founded by the Simpson family, a big lumber and shipping company out of San Francisco.

The oldest townsite is my town, Port Orford, founded as a military post, in 1851. Its population is almost twelvehundred souls, half of whom are year-round residents, mostly retirees and artists.

The rugged coast of Oregon is mostly fog free since storms sweep through and clear the air regularly.

Everything is green.  Our rainy season is coming to an end, heralding a dry season.  Our temperatures range from 40 F in the winter months to 60+F in the summer months.
Posted by Rosaria Williams at 8:03 PM

Wonderful photos. Lighthouses do have as special something, don't they?

My older sister lived in Coos Bay for a few years in the late seventies. I visited once and loved it. We still have great photos from that visit.

It is very beautiful, Rosaria. :)

I would love to take the time and explore that coastline someday. I like remote places where people do not go.

love the symbolism of the lighthouse...and all that driftwood, so cool.

Loved the graveyard image -- drifts of bleached bones from the sea...if driftwood could talk what stories they'd tell.

Loved the graveyard image -- drifts of bleached bones from the sea...if driftwood could talk what stories they'd tell.

i have always been fascinated by lighthouses. i bet there are a few undiscovered ones from years back too.

shhh don't tell people how few souls reside there as soon as it is found out there is room to stretch...well it will be like your favorite little eatery being reviewed favorably by a foodie magazine.

When we were out west last fall, we were blown away by the beauty that is the coast of Oregon!

Thank you for this wonderful history of your town. It always looks so beautiful, rugged, unspoiled.

I love driftwood. How I miss the ocean... I'm becoming repetitive, I know!

That last photo of the bleached timber is glorious - makes it look like a pile of old bones... which in a way, it is... a ship's skeleton.

Rosaria, what a wonderful travelogue and history of Oregon, its lighthouses and, especially, Port Orford. Of course, here, with all our fog, we definitely need lighthouses and LOUD foghorns.

That beautiful drift wood looks like the bones of human souls.

Thank you for sharing your home with us.

There seems to be a rugged tranquility about that coast. All that space and lack of people.
Wonderful photos.

Wonderful photos. I love lighthouses .. there's a certain romanticism about them.

I love lighthouses and have a collection of them. Oregon sounds and looks so beautiful and is on my "must see" list. Your town sounds wonderful!

I love lighthouses, too, but live very far from any now. In Morocco the lighthouse was more of a beacon with a solitary person who checked on the beacon but did not live in the structure which really was just housing for the light. We lived on Mehdia Beach one of three beaches Patton used for the invasion of Africa. He landed the his group nearer Cassablanca.

It's fun to hear your stories about lighthouses. Thanks for sharing.

Lighthouses used to be manned, day and night. Those folks who had that responsibility were hardy souls, thoroughly dedicated, with no days off for any reason. The good old days were harsh on most people.

Next post, I'll talk about the local lighthouse: Cape Blanco.

Beautiful. I just quit my at home job due to a corporate take over...actually quite nice to be forced to make a decision about quitting a job that was keeping me stuck. Had thought I would do it for another five years till retirement, but golly it's nice to be FREE now. Here's to new beginnings! **blows kisses** Deb

Beautiful! I adore lighthouses, too.

You live in paradise! It is such a beautiful coastline! And the lighthouses offer such warmth and hope! I love them. This is a de-light-ful post! (Sorry, couldn't resist ;-)) I loved it! ~Janine XO

I love lighthouses. And coastal scenes generally, but there's something just special about a lighthouse. I can't quite explain it.